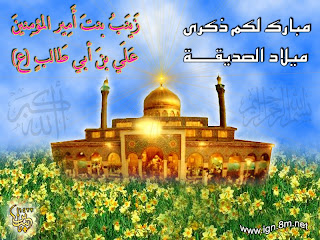 Zainabia Trust, Mumbai conveys greetings to all the lovers of Ahlul Bayt (a.s.) the Birth Anniversary of Hadhrat Zainab (a.s.).
It was five years after the Muslims had accompanied the Prophet (PBUH&HF) and his family in the migration (Hijrah) to Medina, when the Holy Prophet's daughter, Hadhrat Fatima (AS), gave birth to a little girl.'
When her father, Imam Ali (AS), saw his daughter for the first time Imam Husayn (AS), who was then almost three years old, was with him. The boy exclaimed in delight,
"O father, Allah has given me a sister."
>>>>>For Detail Click<<<<<
at May 07, 2008