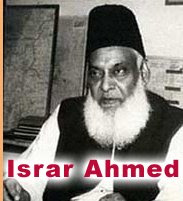 On 12th June 2008, one such person famous as Maulana Israr Ahmed uttered words to the effect that (naudbillah thumma naudbillah) Hazrat Ali (K.M.W) once drank wine and under its influence he misread a verse while leading congregational prayers. Utterance of such nonsense for one 'made pure'by Allah (verse 33:33) is something for which Allah shall appropriately penalize this person in this world and in the hereafter.
We, therefore, leave it to Allah to deal with this blasphemer who is beyond redemption. However, we find it disturbing that QTV, a component of ARY network, is the one that aired this blasphemy.
You will be aware that this reprehensible act of QTV is not only a misdemeanor that can result in cancellation of its cable TV license in Pakistan by PEMRA, but is a cognizable offence under section 298-A of the Pakistan Penal Code.
(Extract of a letter written to QTV by sunni.mission@gmail.com )
(Thanks, Jalal Kazim <jalalkazim@hotmail.com)
at June 30, 2008 No comments: