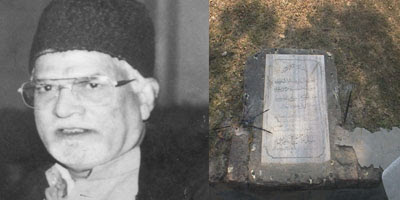 Remembering marhum Sayed Ghulam Hasnain Rizvi Kararvi (taaba saraah) on his 12th death anniversary, a majlis has been organised by Zainabia Trust, at Zainabia, Mumbai-9. on Saturday, 6th of September 2008. The majlis will be recited by Hujjatul Islam Maulana Sayed Hasnain Kararvi at 6.00 pm. Marhum Ghulam Hasnain was one of the trustees of Zainabia Trust. He was editor of Al-Muntazar magazine published by Association of Imam Mahdi (a.s.). He was also the co-founder of Association of Imam Mahdi (a.s.) along with marhum Agha Ismail Rajabi (taaba saraah). He translated the persian books/booklets written by marhum Agha Ismail Rajabi (taaba saraah) into urdu language and published through Idara-e-Nashre Uloom-e-Aal-Mohammad (s.a.w.), Moghul Masjid. Marhum Sayed Ghulam Hasnain (taaba saraah) translated more than 250 Persian books/booklets and unaccounted articles for Association into Urdu language. He taught Urdu language to the students of Najafi House Hawza, Jamae Amirul Mo'mineen and mentored his students to become a good Aalim-e-deen. He always tried to bring out best from the youths and always guided and encouraged them. He polished the Urdu language of his colleagues and even to his elders. For example one of his best friend -Sayed Mohammad Akbar Rizvi- two years elder to him, and the current editor of al-Muntazar magazine proudly says that marhum was his teacher and calls him ustad-e-mohtaram.
Dr. Akhtar Hasan Rizvi (Rizvi Builders) still feels his absence, the sad demise of Marhum Sayed Ghulam Hasnain (taaba saraah) was a great loss for him as he always consulted him in religious matters. It was marhum who insisted Dr. Rizvi to establish a college at his native place (Karari). Today the Rizvi College at Karari stands taller in 4/5 Districts around Allahabad with more than 5 faculties and a modern English medium school.
Marhum's love for Imam Mahdi (atfs) was profound. After a hectic tour of eastern Uttar Pradesh, holding exhibitions and functions, celebrating the birth of Imam-e-Zamana (a.s.) in January 1996 during the holy month of Sha'ban, (Kanpur was his last city) he breathed his last at Lucknow and was buried in his home town Karari, beside his father marhum Amir Ali ibne Roshan Ali. He was just 62 years of age. After his burial in his ancestral graveyard, the graveyard was renamed as Waadis Salaam.
Marhum Sayed Ghulam Hasnain (taaba saraah) never believed in groupism among the Mo'mineen. He brought the people together. He organised the Moharram Majalis in Karari which previously clashed with each other. Still the Majalis are held as per the time table arranged by him during his life time.
His Sewwom (majlis on 3rd day after burial) was read by Hujjatul Islam Maulana Ahmed Ali Abedi sb. A night before Chehlum by Maulana Mehmoodul Hasan of Jaunpur. The Chehlum Majlis by Maulana Mirza Mohammad Athar Sb. Same evening of Chehlum another Majlis was read by Hujjatul Islam Sayed Safi Haider Sb at his grave in Waadis Salaam.
He left behind we 4 bros. and 3 sisters. Janab Ainur Reza Rizvi is his eldest son in law, Hujjatul Islam Maulana Sayed Hasnain Kararvi is second son in law and Prof. Nazar Abbas is his youngest son in law.
His only brother Janab Sayed Ghulam Sibtain Rizvi is living in Karari and is a scholar himself. He now manages Amjadia Madrasa after his retirement. He is a good khushnawees (calligrapher) and was a Marsiya recitor during his younger days.
Marhum was very kind and loving. His pen name was "Shafeeq." He very much loved his home town and he wrote after his name as Kararvi. Hujjatul Islam Sayed Mohammad al-Musavi always referred to him "Janab Kararvi Saheb."
May Almighty Allah elevates his position in the Hereafter. I personally feel that during the time of the re-appearance of Imam Mahdi (a.s.) he will come out from his grave wrapped in Kafan, holding a sword in his hand as one of his (atfs) helpers. InshaAllah.
I request for a sura-e-Fateha for his departed soul.
at September 05, 2008