The Wahhabi Terrorists in Mumbai? 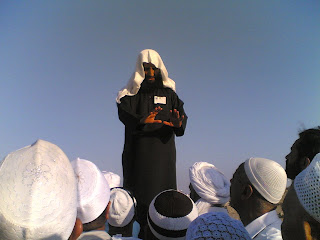 It is very much unfortunate and severely condemnable the terrorist attacks going on in Mumbai since last night. These savages are humans in disguise, Satanic in nature. The enemies of the humanity. These killers emulate Yazid, Shimr, Ibne Ziyad, Ibne Muljim, Saddam, Osama etc etc. They have no mercy for innocent women and children. These blood suckers call themselves Muslims and followers of Prophet Mohammad (s.a.w), but have no respect for the Prophet (s.a.w.) and claim that He (s.a.w.) was like an ordinary human being like them. These Pseudo Muslims (PM) forget that the holy Prophet (s.a.w.) was mercy for the entire universe. They are the friends of the oppressors and tyrants, and they pray for the forgiveness of the tyrants like Yazeed. These PMs have defamed Islam by their wrong beliefs and methods and use force on others to implement the obedience to Islamic laws. These people have typical and absurd dress code appearing like blokes. These PMs are breed hatred among the mankind and the whole world know that where they are financed from. These are known as WAHHABIS.

*I clicked the above photograph of a Wahhabi paid preacher misguiding the Hajis at Jannatul Baqee, Madina on 5th Jan.2008.
at November 27, 2008

You are right. They are the illegitimate sons of yazeed. They gave ample proof of it when they knocked on a door of a poor man staying in a slum behind my office. Asked him for water...drank it and then shot the man point blank before fleeing from there.

· The Wahhabi extremist movements have political agendas and want to impose their version of Islam not only in Muslim states, but also throughout the world;

· Sufism,shism on the other hand, stresses self-purification and has little or no political dimension.

So, it is a moderate movement and cannot pose any serious security or political threat to the world;
· A Wahhabi cannot be moderate; and
· A shia Muslim cannot be an extremist.
www.alqaem.org

Poor misguided Shias. I feel sorry for you all. May Allah give you guidance to the truth.

And tuth is with Allah, His messengers and with the instructions of Holy Quran.