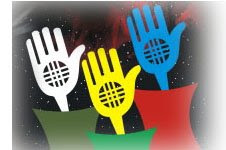 Yesterday, I attended a Majlis at Andheri. The audience were few and selected due to short of space. The zakir was a learned Hujjatul Islam. The programme started with Hadith-e-Kisa & a salaam by a junior youth. After Majlis there were two nauhas one by a youngster and another by a nauha khwan who hails from Kamptee. The invitees were scholars, businessmen and prominent personalities.

The highlight of this Majlis was that the host has given a 'topic' to Hujjatul Islam. It was "Azadaari and our Responsibility." Hujjatul Islam introduced the topic and could say few points in the available limited time and explained that Azadaari is an invaluable treasure for us, and the enemies are very much worried that how to destroy this treasure or how to take away this by introducing other unapproved elements which are not at par with the Shariat. I qoute one of his statement, "we should be very careful, that our Azadari is not overpowered by rituals which contradict Shariat, as the lives of Masumeen (a.s.) have been sacrificed for this. So, before proceeding towards any ritual, we should think, that, will this action be approved by our beloved Masumeen (a.s.)?"
He gave the example of doing sajdah in front of Shabeeh or Dargah. He said Almighty Allah has not permitted sajdah to anyone except to Himself.

Hujjatul Islam wanted to say more, but he could not stretch talk on the issue. He had to leave for another place, another Majlis. The Biryani (niyaz) was very delicious.
May Allah give more tawfiqaat to the host.

Salaam, good observation but it is hard to change when clergy also is confused on how to approach it. The clergy mostly worried and rightly so are the one who wants Islam to flourish and those clergy opposed are happy with one inch space that they have and don't want to take risk.

Just to update your knowledge - Sajda is not part of Azadari. That Gujja aka hujja - which you listened in Andheri - was a idiot.

And if you see that Idiot Gujja aka Hujja - tell him, their is a big difference b/w. Shabeeh and Dargah.

Shabeeh is shair-ullah and Dargah is tomb of a dead human being.

Sajda to Shair ullah was denied by Shaitan and won't be surprised this Gujja aka hujja would be a disciple of Iblis.

For majlis - you do not invite people - invitation are made for seminars. So you should infact say "I attended a seminar at Andheri".

May Allah give Najaat from Stupid / idiots shias and Gujja molvis - who are causing undue damage to our religion.

The azadari of Imam Husain (a.s.)should be used to strengthen our aqaeed. It should be used to rectify our way of life, e.g marital life, children's upbringing, educating the philosophy of Kerbala. There are lots of divorces taking place in our community. They should be explained where things go wrong and why and what is the solution. It is extremely important to educate our community so that they do not do things blindly but with good understanding.

Those who are NOT fit to preach from the mimber should be avoided at every cost. Unfortunately, our enemies now a days are also seen on the mimber misguiding our community.

The language of the comment of Mr. Azadar shows his upbringing. He could have commented the same thing in polite and nice manner. He does'nt seem to be a follower of Ahlul bayt (a.s.) who were very polite with their approach, even with their enemies. Rather, he proves to be a fake and self proclaimed azadar.

Mr. ahmmed, why are you being personal ? Point out if Mr. azadar has said somthing wrong in the post - what he has said is happening everwhere

Its true "empty vessels make more noise" - so dont be part of it !