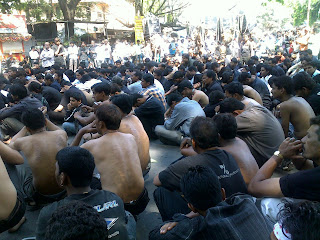 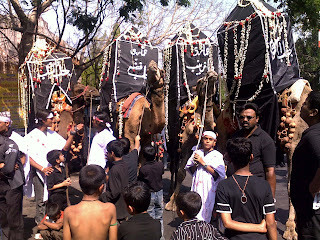 Matam by Zanjeer and Qama were done at the . A speech was delivered by Maulana Sayyed Sibte Hasan Sahab. He pointed out that a name on the tongue of everyone was there “HUSAIN HUSAIN” “ YA ABBAS” “YA ABDILLAH”. He said that this Juloos is in the memory of the same people who were the progoney of Prophet of Islam, who were slaughtered by the tyrant YAZID, THE SON of the MOAVIYAH, the self claimed caliph of a sect of the Muslims.

YA..MAWLA ...YA....ABBAS.............IT WAS SO NICE TO SEE THIS COVERAGE ON THE NET FOR THE FIRST TIME EVER, UNFORTUNATELY, THOUGH PUNE IS QUITE SPECIAL IN ITS STYLE, MULTI-LINGUAL AND TYPE OF AZADARI, YET IT IS LESS KNOWN AMONGST ALL OTHER PLACES IN INDIA AND ABROAD...I HOPE PEOPLE FROM OTHER PLACES SHALL TRY TO VISIT THIS PLACE FOR MOHARRAM TO SEE THE VARIETY AND UNUSUAL STYLE OF MAATAM AND NOHAS , A BLEND OF WHICH IS NOT SO COMMON IN INDIA...MY PRAYERS TO ALL THOSE WHO HAVE DONE THIS GOOD JOB ..KEEP IT UP...AJRE HAME BAA ABA ABDILLAH