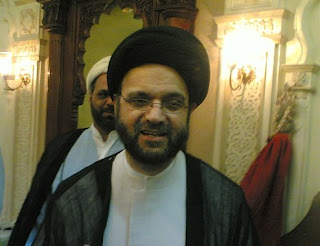 Hujjatul Islam Sayyed Mohammad al Musawi was in Bandra on Tuesday. He delivered a very beautiful speech after Maghrabayn Namaaz followed by Question-Answer session.
Following are the points selected from his speech:
1) United Nations Organisations gave a message to the Muslim world and to the Arabs that a person known as Ali ibne Abi Talib has written a letter to his governer in Egypt named Maalik-e-Ashtar that how he should rule his state. It is the best method of governance. The letter can be found in Nahj al Balagha.
2) We should use our intellect which is a great bounty of Almighty Allah.
3) He pointed out that this world filled with injustice and opppression will be refilled with Justice and Equity by Imam-e-Zaman (a.s.). We should follow the commands and teachings of Ahlul Bayt (a.s.) to pave the way for his early re-appearance.
4) Agha also said that Ahlul Bayt (a.s.) teachings should be studied deeply and to be dispensed to others. The American scientists after a lot of research have concluded that smelling an apple while having headache will do away with the headache. This remedy has already given by Imam Sadiq (a.s.) some 1400 years back.
The Question-Answers session was lively and interesting.
- A question was put up that are we allowed to have eatables from the hands of non-Muslims?
Agha replied that Najis eatables are not allowed from a Muslim or a Non-Muslim. While one can have paak food given by them. If a Muslim gives you Najis food it is not permitted to have that one.
- A question was regarding sporting a beard, is it wajib? He replied that sporting a beard is not wajib but, shaving it is Haraam.
- A person asked Agha to define "Wilayat of Faqeeh". He said that "Accepting the authority of Marjae' Taqleed is Wilayat-e-Faqeeh."