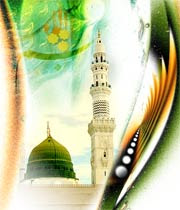 only because of this blessing and said to him that this was from the grace of my Lord. Jibra'il said, `The Angel of Death is the most diligent Angel when it comes to carrying out his responsibility.' I asked him, `Does `Izra'il (another name for the Angel of Death) take the soul of anyone who has died or anyone who will die?' Jibra'il replied, `Yes, it is so.'

I then asked the Angel of Death, `Do you see where the people are?' He replied, `Yes. I see then and (I also see) the entire universe which is in front of me.' The Angel of Death continued, `Allah

has given me the permission to have complete awareness over all of them. They are to me just like a dirham (coin) in the hand of a person, such that any way he wants to hold the coin, he can (so too, he has control and perception over all of Allah's creations). There is not a single house which I do not visit five times per day. I say to the people of each house, "Do not cry over your deceased because I will continuously come and go from your house, until the time comes when not a single person will remain there."'..........Click for full Read