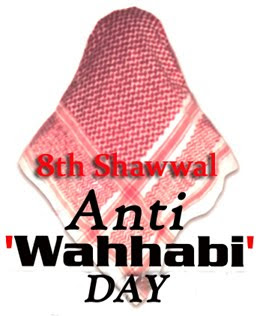 Protest at number of places by not only Shias, but, also by Sunni brothers on the demolition of Rauzas in Jannatul Baqee. The tombs under which were the graves of 4 holy Imams, Uncle of the Holy Prophet (pbuhp) Janabe Abbas and Hadhrat Fatema Zahra (s.a.), the only and beloved daughter of Holy Prophet of Islam (pbuhp).
Since the construction of Zainabia Imambada in 1988, Eighth shawwal is remembered as the day of mourning. The day of Protest. The founder of this Protest Day at Zainabia Imambada was my marhum father, Sayed Ghulam Hasnain Rizvi Kararvi.
Tonight at 8.30 pm at the same venue, a Majlis will be recited by Maulana Syed Hasnain Kararvi followed by Nauha and Maatam by 2 Anjumans. Anjuman-e-Abidya, Nawgawan Sadaat and Anjuman-e-Imamia, Lucknow.
Some person asked, why we do maatam to protest?
The answer is; We protest to let the world know that this Wahabis destroyed the tomb of the grandsons of their own Prophet (pbuhp) in 1925.
We mourn as the Imam of the time is in ghaybat. We await his re-appearance. His occultation is a great tragedy for us. We pray that Almighty Allah hastens his Zohoor (re-appearance). This mourning and maatam proves that we are alive and concern, and also our love and affection towards our holy Imams (a.s.).
We also pray that the rule of this wahabi regime comes to an end soon so that the tombs at Jannatul Mualla and Jannatul Baqee can be rebuild.
at September 27, 2009

Don’t Despair, Take Actions within your capacity & Duas too.
Duas have a very important role but have to be accompanied by actions.
We have to take the required action & leave the rest to HIS will. Allama Hilli commenced copying a very big book at dusk, though it was an impossible task to do it by dawn & return the book to its owner as required. His job was to start the work & with the Imams help the work was accomplished!

The opponents/enemy of Ahlebait (as) ie. Wahhabis may appear very strong and adamanat to oppose our visiting Jannatul Baqi , reciting ziarat & efforts of rebuilding the shrines by organizing protest and rallies & informing Muslim World of the demolishing of the tomb of beloved daughter of Holy Prophet and Aimmae Baqi (as).But this should not lead to despair. It should lead us to redouble our efforts instead with the resources at our disposal. There are examples in History where the impossible became a reality in a very short period of time.
Eg. Bilal would have been very happy at being able to practice Islam himself without prosecution, in Mecca, but could never have imagined that he would be reciting the Azan from top of the Kaaba within a few years!

Our Imam has also advised us to all to await and pray for his reappearance to all young old, men & women & children, just as Kerbala required all participants. Today the enemies have destroyed house of of Ahlebait (as) where Angels visited frequently and where Holy prophet used to send salam .Today we see Masjide Nabi glittering with lights at night & on the otherhand not even a chiraagh on grave of Shehzaadi Zehra (sa) and left totally viraan and also restricted to be visited by Zaaereen to recite even Ziarat & surae Fateha.
Our Imam (as) is in ghaibat and he must also be often visiting the graveyard of Baqi & looking at the viraan qabr of his Jeddah (sa) & Aimma e Baqi (as) and also remembering the zulm done on her .
We pray to Allah (swt) to remove his ghaibat and hasten his Zuhoor as gift of Idd ul fitr and keep us among his lovers and servants Inshallah.
Each of us is required to act in our own way to hasten the reappearance.
We pray to Allah (swt) by giving vasta of broken ribs of Zehra (sa) to immediately hasten reappearance and remove ghaibat of Imame Zaman (as) & keep us amongst his true helpers & true followers.