For Demanding Graveyard, Shias forced out of Gujarat Village

Even during the 2002 Gujarat riots when eleven people were burnt alive in neighbouring Sardarpura, this village with a population of over 3,200 remained an island of peace, the bond between majority Hindus and minority Muslims here unshaken. But seven years later, that has changed completely.
All 85 Momins, a Shia sub-sect, have quit Kharavda, blaming the Chaudharies who make nearly 50 per cent of the village population.
The Momins have sought refuge in a Jamaatkhana at Vadnagar, 40 km away, and say they will never return to the village. And it is all because the Momins sought one acre from the village panchayat to bury their dead — burials so far were being done in Kharta Parsa, 30 km away, and it was not easy transporting bodies.
..+>Click for complete story<+.. 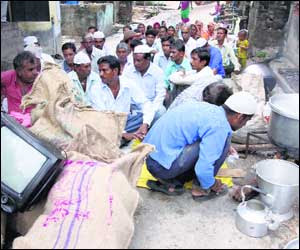 Migrants from Kharavda village sitting with their household goods outside the Momin Jamaatkhana in Vadnagar where they are taking shelter currently.
at September 25, 2009