Last night a majlis was held at Zainabia Imambada followed by Nauha and Maatam. The Majlis was recited by Hujjatul Islam maulana Sayed Hasnain Kararvi in which he described the criminal action of Saudi regime of the demolition of Jannatul Baqee in Madina and Jannatul Mualla in Makka. Maulana gave a brief history of the crimes of Wahhabis who had attacked holy shrines at Karbala also.
Anjuman-e-Abidia (Nawgawan) did nauha and maatam after the majlis. 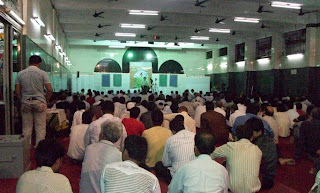 The participants in this programme later gave their opinions that the Wahhabi ideology has made the world unsafe for the mankind. Abrar Ahmad said that these terrorist have a brutal and cruel mentality and they have been engaged in mass killings of unprotected and innocent citizens around the world consisting mainly women and children.

Safdar Abbas looked concerned, he said "Suicide bombers have killed thousands of Muslims in Afghanistan, Pakistan, Iraq. But, they did not target other Arab countries such as Jordan, Egypt and Saudia Arabia (the friends of Israel) as these countries are supposed to be their financiers."

"They have a very wrong concept, that killing Muslims will lead them straight to Paradise. In fact these are the fuel of the Hell fire. The alQaeda and Taliban are the stooge of western powers. These fanatics are used by these imperialists. " Mujawir Husain explained.

A teenager reacted to these statements and questioned: "How the Jannatul Mualla and Jannatul Baqee can be re-built?"

I invite my readers to give an answer to this boy's question, which is a step ahead to this Protest Programme.
at September 28, 2009

Having Nuclear Weapons and threaten the Saudi Kingdom." If Jannatul Baqi is not Built u will b in flames"..Thats it.. end of Story..Jannatul Baqi Built..

With regards to annihilation & demolishing of dome of Jannatul Baqi where beloved daughter of Holy Prophet (saw), Shahzaadi Fatima Zehra (sa) is buried & where also our four infallible Imams are resting (buried),Muslim Ummah should not be like silent spectators but should agitate & form a joint strategy & efforts to get its dome constructed .
We remember the saying of Messenger of Allah (saw) saying on many occasions :
"Surely Allah made it incumbent on you to love my kin, and I will ask you about them in the hereafter."
Fatima is a part of me.What pleases her pleases me, and what saddens her, saddens me.”
Fatima is the joy of my heart, and her sons are the fruit of my soul.”
Whatever upsets her upsets me, and whatever harms her harms me. whoever makes her angry makes me angry.”

Despite of all these ahadees she was oppressed and her right was neglected and while undergoing the pain of losing her father she was still troubled & nobody paid attention to Fatima’s plead.
Enemies of Ahlebait (as) raided her house when Hasnain (as) were also present in the house and slapping her face and throwing her to the ground repeatedly punching and kicking her, set fire to the door of the house and she was crushed between the door and the wall such a way that her ribs were smashed and lungs were pierced . She sustained a number of horrific injuries as a result of which she died later. Her unborn baby son whom Rasulollah had named Mohsen, died instantly in the course of the assault by the enemies of Ahlebait (as).

Imam Sadeq (a.s.) stated, “She received severe blows on her body for the defense of Ali (as). The history has recorded her name as one of the fives who cried a lot.
Imam Ali (as) sat besides Fatima (sa) on the last day of Fatima’s life at dusk consoling her. Although he was the most brave among Arabs, as a dam in front of the difficulties, and a mountain of resistance, he blew out crying when seeing Fatima’s status.
The transgressors will surely find out (on the Day of Judgement ) when she will enter the Last Judgment while complaining the oppressors and seeking for justice from Allah. (swt)

Lovers of Ahlebait (as) must awake from the slumber and spread awareness of oppression, oppressor and oppressed.They should account themselves how well related and connected are they to Ahlebait (as) and their teachings. Ahlebait (as) & Aimma (as) were never allowed to live peacefully and were either prisoned, poisoned or killed.
Lovers of Imam Husain (as) & Muslim Ummah should display a united agitation against enemies of Ahlebait (as) and be like a united concrete wall in thwarting the conspiracies of Wahhabi , their ideologies & teachings and inform & create awareness among Muslim masses that these Wahhabi are in fact not only enemies of Ahlebait (as) but also enemies of religion of Allah (swt) .
We remember one of the sayings of Ameerul Momineen:
“ If the right usurped from us is given back to us we shall take it, otherwise we shall go on claiming it.”
We are noble and peaceful people, but it doesn’t mean that we are weak. Imam e Zamana (as) always supports & helps those who strive for this cause.
We pray to our Lord , “O Allah! for the sake of your chosen maid, “Zahra” (sa) and for the sake of her unlimited innocence, we plead You to hasten the reappearance of Yusuf-e-Zahra, the last from the chain of Imamat & the promised one in Quran Hazrat Baqiyatullah (atfs),the hope of all oppressed & peace lovers .
We also request all his lovers to act and display their concern for getting Jannatul Baqi constructed by creating its awareness among Muslim masses and use all their means & channels to unveil the mask of enemies of Ahlebait (as).