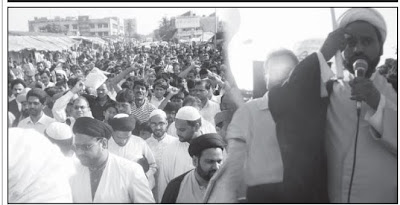 There was a procession protesting the demolition of Jannatul Baqee by Muslims at Malad Malony on last Sunday evening. There was a huge turnout. Speaker after speaker gave a very lively speech venting their ire on the Saudi regime who is preventing to re-build a Rauza at Jannatul Baqee graveyard in Madina which was razed by the Wahhabis in 1925.

Prominent Olama and Zakereen attended this protest procession from different parts of the Mumbai City. For more than 10 years this programme is going on in Malad.

They demanded that the tombs should be urgently build under which there were graves of the 4 holy Imams and the beloved daughter of the Holy Prophet of Islam (pbuhp) Hadhrat Fatema Zahra (s.a.). In Jannatul Baqee there are graves of historical personalities of Islam; Ummul Baneen, Martyrs of Ohod, Wives of the holy Prophets and number of Ashaab (followers of the Prophet).

In the end the gathering prayed for the early re-appearance of Imam-e-Zamaana (a.s.) so that he can fill this world with Justice and Equity.
at September 28, 2009

On 8th Shawwal, Wednesday, in the year 1345 AH (April 21, 1925), mausoleums in Jannatul al-Baqi (Madina) were demolished by King Ibn Saud. In the same year he also demolished the tombs of holy personages at Jannat al-Mualla (Makkah) where the Holy Prophet(pbuh&hf)'s mother, wife, grandfather and other ancestors are buried. Cannons were fired [by the Wahabi soldiers] at the Ka'bah and its covering cloth, the kiswa, caught alight.
The Wahhabis believe that visiting the graves and the shrines of the Prophets, the Imams is a form of idolatry and totally un-Islamic.
The Wahhabis entered Madina to desecrate AL-BAQI as well as every mosque they came across. An attempt was even made to demolish the Prophet's tomb, but for one reason or another, the idea was abandoned. Those who did not conform with their belief were killed and their property was confiscated.
They said,”"We know that the tomb standing on the Prophet's grave is against our principles, and to have his grave in a mosque is an abominable sin."
Is it not strange that the Wahhabis find it offensive to have the tombs, shrines and other places of importance preserved, while the remains of their Saudi kings are being guarded at the expense of millions of dollars?
Their master plan & idea is to eradicate the Islamic legacy and heritage and to systematically remove all its vestiges so that in the days to come, Muslims will have no affiliation with their religious history.

The destructed holy shrines of Mohsina-e-Insaniyyat and Mohsina-e-Islam Syeda Fatima Zahra (S.A.) is result of heinous activity of Aal-e-Saud, is a question mark for Muslim Ummah.The destruction of Jannatul Baqee and Jannatul Mualla for the last 84 years is the tragic chapter of Islamic history.Muslim ummat cannot play role of silent spectators with regards to demolishing of
Sha’a’ir-Ullah .
Holy places are the assets of the whole Islamic Ummah and every Muslim must defends it and if the Islamic World & Muslims do not get the dignity of the holy places restored soon, then it could be turn of Masjid e Nabi tommorow as these Wahhabi will destroy all sacred places one by one in the name of shirk & bidat.

Finally and most importantly, these direct attack emphasizes the need for the Muslim community to unite & adhere to the advice of Imam Ali (p) in his last words where he urged for excelling in piety and organization of affairs.

The Holy Qur’an testifies,
"And they devised plans and Allah too had arranged a plan; and Allah is the best of planners”.
Lastly, we pray to Allah (swt)from depth of our heart & with tearful eyes to hasten Zuhoor of his last Hujjat & Yusufe Zehra(sa)so that he avenges the blood of his oppressed grandmother & the unjustly shed blood of grandson of Prophet Mohammad(saw)
Sayyed as Shoda Hazrat Imam Husain (as).


Lowest servant of his Masters servant.