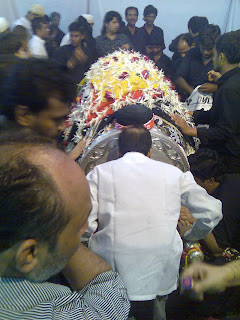 Remembering the martyrdom of Hadhrat Imam Ali ibn Abi Talib on 21st Ramadhan there was a Majlis and Juloos at Zainabia Imambada in the early hours on 12th Sept. 2009.
After the A'maal of Shab-e-Qadr which was lead by Hujjatul Islam Maulana Sayed Hasnain Kararvi, Anjuman-e-Mashke Sakina did a heavy Nauha and Matam, there was a Sehri arrangement at Imambada. Later a Majlis was recited by Janab A'jaz Abbas after which there was a Tabut (replica of the coffin of Imam Ali (a.s.)). This Tabut was made of pure silver costing Rs. 4.5 lacs. The Juloos proceeded to Moghul Masjid. The huge crowd estimated to be above 10,000 mourned and did Maatam all along the way.
at September 12, 2009

The amount and figures quoted by you sounds to be raising an eyebrows for our brothers in Mumbai. As I suppose ISLAM does not work on Guess....? work. So make sure the weightage and cost material of the Tabut is correct.