It has been reported by our correspondent that in the Khutba of Eidul Fitr, Imam-e-Jama'at of Moghul Masjid has said that he doesn't consider marhum Ayatullah al-Uzma Abul Qasim alKhuie as an Aa'lam. Replying to his statement, below is a very brief list of the scholarly works of the late Ayatullah. Allah knows best the intentions of Maulana Nasiri saheb. 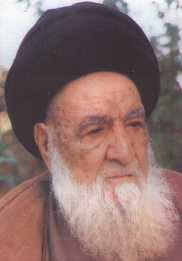 Khoei wrote on various topics, ranging from Islamic jurisprudence to mathematics and astronomy and was a prolific writer in the these disciplines. He wrote 37 books and treatises, most of which have been published. His works include:
Due to his prominent position as a teacher and scholar in Najaf, he became an important leader of worldwide Shias. He was made the most prominent Grand Ayatollah in 1971 after the death of Ayatollah Sayed Muhsin al-Hakim. In this position, he became a patron of numerous institutions across the globe that sought to provide welfare, and also provided scholarships to theological students from across the Muslim world.
He is considered as the architect of a distinct school of thought in the priciples of jurisprudence and Islamic law, and one of the leading exponents of 'kalam'-scholastic theology- and 'rijal'- study of the biographies of transmitters of ahadith, the Prophetic traditions, 'fiqh'- jurisprudence- and 'tafseer'- exegesis of The Holy Qur'an. His interests included astronomy, maths, and philosophy.
His post-graduate institute normally accommodated some 150 students, at any given time. Among the students who attended classes and were personally supervised by Khoei included
..::read more::..
at October 10, 2009

He (Nasiri saheb) must be fasting on that day

Now wat do v do with him?? ...Consider him as Vakil of Ayatollah Sistani ? Bcoz his intention is not upto the mark...Plz answer this? As we are staying in Mumbai and Nasiri Sahab is the link between us and Ayatillah Sistani

If he is a vakil of Ayatullah Sistani then why he switched off his mobile phone when people wanted to know about the new moon?

Brothers and sisters, i would like to add one point, the person who has posted this column, he himself has heard this, if Yes then tell him to give PLAIN FACTS, rather than a correspondent, the person who has written this he himself has not attended the Eid-Ul-Fitr Namaz on that particular day. Plus this person has created tension by writing about Anjuman-e-Mashk-e-Sakina has not done Mataam on the day which Zainabia trust has kept the majlis on demolition day which later on he removed from the blog. It is always easy to comment on Others rather than digging our own souls.....Remember this..

On this article, i just want to clear that;

whomsoever thinks that the article is correct or incorrect then,

have a coffee/tea with maulana nasiri and have a conversation on this issue..

the 1(one) who is saying all that stuffs about maulana nasiri, kindly remember that, when u point somebody 3fingures point "you"

I request to the commentors that they should use scholarly language in their comments. Maulana Nasiri saheb is an aalim and Imam-e-Jama'at of Moghul Masjid. We have no right to disrespect him. Not agreeing to his views doesn't mean that he should be abused. The followers and lovers of Ahlul Bait (a.s.) are soft spoken, respect others and do not use foul language. The moon sighting issue is not a political one. So please comment on the point and in a civilised language.

I like reading your blog for the reason that you can constantly bring us new and awesome stuff, I feel that I ought to at least say a thank you for your hard work.