How to Manage Your Anger 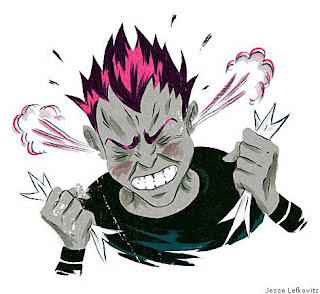 The Qur'an 42:47 speaks of forgiveness, "And those who avoid major sins and immoralities and when angry they forgive"
The glorious Qur'an (15:58) speaks also of kindness and wing lowering, "and lower your wing (show kindness) to the believers." In addition to these two virtues,
the Qur'an 5:54 talks about humility, "they are humble toward the believers."
Getting angry is nothing to be proud of; it is not even a sign of strength.
The Prophet (peace and blessings be unto him) said," Strong is not the one who wrestles others to the ground, but strong is the one who controls himself when angry."
The Prophet (peace and blessings be unto him) said,
"I am warning you of zun which is thinking badly of others; zun is the most unreliable form of interaction; don't follow each other's shortcomings; don't spy on each other; don't envy each other; don't hate one another; don't plan evil to each other; be true servants of Allah-brothers in faith."
The last four virtues of forgiveness, kindness, humility and zun-avoidance bundle together to develop a shield against anger.

The glorious Qur'an (3:133, 3:134, 5:13) reminds Muslims directly and indirectly to forgive others before asking forgiveness from Allah. To build the Islamic personality with built-in defense against anger, the Prophet (peace and blessings be unto him) describe the Muslim who does not forgive as akir (evil one), "The awakirs (evil ones) are three: a leader who doesn't thank you if you do well and who does not forgive you when you make a mistake; a bad neighbor who burry your good deeds and broadcast your bad deeds; and a woman who hurts you in your presence and cheats on you in your absence." Who wants to be an evil one? Who wants to be an akir? Islam is practical; it acknowledges the imperfect nature of people. Interaction between people could be positive and could be negative. Muslims should continue interacting with people in spite of the negative possibilities. Our Prophet (peace and blessings be unto him) teaches Muslims to be active in their communities and mix with people and tolerate their hurts with patience. He said, "The believer who mixes with people and tolerate their hurts is better than the believer who doesn't mix and doesn't tolerate." This is only a sample of how Islam builds the forgiving personality that is capable of dealing with anger properly. The article so far dealt with the first step, protection / prevention aspects of anger.

Now let us turn to the second step, the cure / treatment aspects of anger. So, when angry there are at least seven things to say or to do. First, seek refuge in Allah. "And if an evil suggestion comes to you from shaytan, then seek refuge in Allah, He is hearing and knowing." (Qur'an 7:200) Second, do wudu (washing specific parts of your body according to the tradition of the Prophet who said, "Anger from shaytan, shaytan from fire; fire is put out by water; so when angry do wudu" Third, change body position. Our Prophet (peace and blessings be unto him) said, "If one of you gets angry while standing, he should sit. If he is still angry, he should lie down." We may understand this hadith as follows: when angry, lying down is better than sitting; sitting is better than standing: standing is better than walking; walking is better than sa'y (which is some what between walking and running). Minimum energy positions are better because they are more restrictive.

Fourth, stick your cheek to the ground. Since anger is a product of pride, the Prophet (peace and blessings be unto him) said, "Whoever gets a little angry should stick his cheek to the ground." Fifth, divert attention away from the cause of anger and participate in strenuous physical activity aiming at letting steam out and relaxing muscles. Present day psychologists advice housewives to collect empty beverage cans to flatten them with a hammer when they become angry.

Sixth, be silent, don't speak. The Prophet (peace and blessings be unto him) said, "Teach, simplify, don't complicate and if you get angry be silent." Seventh, interpret events positively.
at October 16, 2009