Last and The Fourth Speical Representative of Imam Mahdi (a.s) 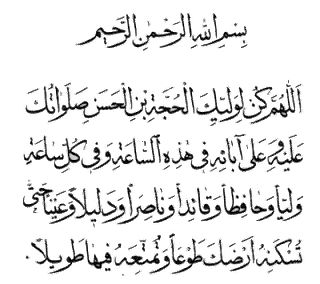 Abul Hasan Ali Ibn Mohammad Seymouri:
He was appointed as the fourth special deputy of Imam Mahdi (a.s) after the demise of Husain Ibn Rauh. He is remembered as one of the companions of Imam Hasan Askari (a.s) and the special representative of Imam Mahdi (a.s) in Baghdad. For three years, he held the coveted post of deputyship. Unlike the previous deputies he could not perform any major task due to his truncated tenure. One of his extra ordinary feats was his prediction of Ibn Babway's demise.
The last Tawqee from Imam (a.s) received by Ali Ibn Mohammad announced the termination of the period of minor occultation Its contents are as follows:

IN THE NAME OF GOD THE BENEFICIENT, THE MERCIFUL:
O Ali Ibn Mohammad Seymouri May increase the reward of your brothers on account of the difficulties born by you. You will die within six days. Regulate your affairs and sum them up. Do not make a will to any body. After you, this chain (of special deputyship) will end and it will mark the beginning of the major occultation. Now, I will re-appear on divine command. But that will be after a long time when the hearts of the people will become hardened and the world will become full of injustice, tyranny and oppression. Yes! There will be some who will claim to be my special deputes. Whoever claims to consult me before the emergence of Sufyani and the heavenly Voice, he is a deceiver and liar. There is no power and strength except that of Allah, the Al-mighty the High".
This is the last letter received from Imam (a.s) in the minor occultation. After three years of deputyship, Ali Ibn Mohammad Seymouri left this world in Shaban, 329 A.H. He is buried on the Khanlanji High way near Bab-jul-Mahool on the bask of the Abi Eqaab river. His last words were "For God is the Affair and He will himself execute it". He lived during the reign of Muttaqui, the Abbaside Caliph.
For 69 years between 260 A.H. till 329 A.H. four people acted as the medium between Imam (a.s) and his followers. This duration is called as the Minor occultation. Some people deem this duration to be 74 years. That is because they calculate it from the birth of Imam (a.s) in 255 A.H. It is certain that the birth of Imam (a.s) in 255 A.H. It is certain that the Imam Mahdi (a.s) did not shoulder the responsibility of Imamat in the life time of Imam Hasan Askari (a.s). Therefore, there was no need for Imam Mahdi (a.s) to be in contact with the people directly, since his respected father was executing it. Hence, the question of the commencement of minor occultation does not
arise right from the birth of Mahdi (a.s).
at October 13, 2009

What a great resource!