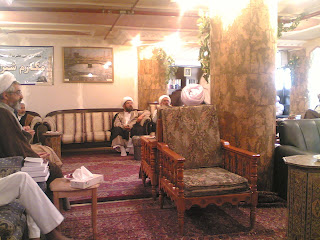 In Madina there are the offices of various Ayatullahs for their muqalledeens for their guidance to the Hajj rituals. The to be haajis visit these offices and seek the guidance from the representatives of the Ayatullahs for the upcoming Hajj masaels. These offices operate in Madina before hajj and shift to Makkah during the Hajj period. The photos show banners of the offices of Hazrat Ayatullahil Uzma Hazrat Makarim Shirazi and Hazrat Ayatullahil Uzma Hazrat Abdul Karim Musawi Ardbeli.
The photograph shows the interior of the office of Hazrat Ayatullahil Uzma Hazrat Makarim Shirazi. Here Hujjatul Islam Aqa-e-Farshad delivered a beautiful speech on "Hajj & Intezar", putting good points on Imam Zaman (a.s.).
I had a lengthy discussion on a mas'alah from Ayatullah Makarim about the Najasat of mushrikeen. It is being propogated that Ayatullah Makarim has permitted to intake najis food through them. The representative denied this and said there are conditions for this. He also said that we will discuss this in detail in Makkah. I will post the detail after Hajj. InshaAllah. 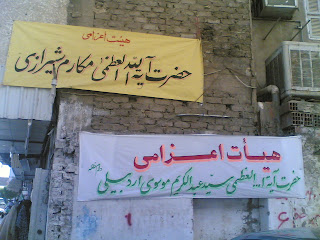