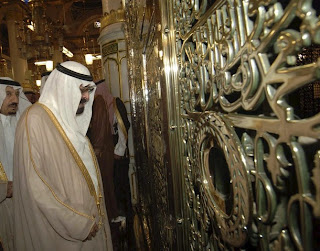 When in Hajj one will find these common words spell out loudly; shirk, haraam, bid'at, kufr, etc. Specially these are heard in Madina, in Masjidun Nabawi and Jannatul Baqi. If you face the green tomb from outside Masjid and recite Ziyarat of Paighambar (s.a.), or inside the Masjid from Riyazul Jannah facing the Zareeh or in Jannatul Baqee facing the graves of A'immah. In these places a bearded man comes from nowhere and showers the above mentioned words and forcefuly makes you face the qiblah. This ignorant man thinks that the Zaer is a practicing Mushrik, a Kaafir and a disobedient Muslim. These people are religous police called "Mutawwa". The self appointed and chosen ones of Allah.

But, certain times these Mutawwas are helpless or they speechless. See the photo above, it is of the King of Saudi Arabia, Abdullah, who is facing towards the grave of the Messenger (s.a.), not towards qiblah. The king seemed to be asking something from the Prophet. His action is not a Shirk nor a Bid'at nor a Kufr and not Haraam. Because a Muslim king is Zillul Laah (shadow of Allah) (sic). He is above shari'at.
at January 18, 2010

King Abdullah may have to go. His cousin prince Faisal will dethrone him any day. In fact in the picture Abdullah is seeking intervention from the holy Prophet to save his crown.