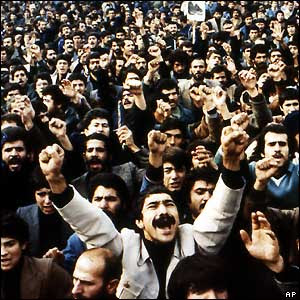 Thousands of Iranians are rallying to mark the 31st anniversary of its Islamic revolution.
President Mahmoud Ahmadinejad attacked the West, and said Iran had produced its first stock of 20% enriched uranium.
It is the most important day in Iran's political calendar.

Official events are being held across Iran, but the main gathering is at Tehran's Azadi Square. State TV showed tens of thousands of people filling the streets.
Mr Ahmadinejad told the crowds Iran was now a "nuclear state" and would soon treble output of 20% enriched uranium. He added that Western countries were hampering genuine reform in Iran.
Today has certainly been a victory for the Iranian government. Inspite of a huge turnout today, western media is reporting it in a negative perspective.
at February 11, 2010