The Return of Abraha 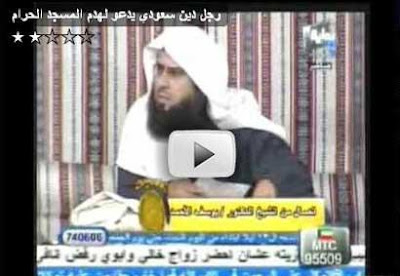 RIYADH, Saudi Arabia: A Salfi Saudi cleric on Wednesday March 17 has called for demolishing the Grand Mosque (Masjid Al-Haram) in the holy city of Makkah and replacing it with a new one featuring "20 to 30" floors in pretext of preventing men and women from mingling during pilgrimages (sha’a’er ot-Tawaf was Sa`ee) which has been in Muslim practice since centuries, says a report in daily Akhbar Al Khaleej.

Sheikh Yousaf Al-Ahmed, an Islamic scholar and a teacher in Muhammad bin Saud Islamic University, was speaking during a phone-in on a Saudi satellite television show.

A viewer posed video footage of the show on the YouTube website, dubbing the cleric "the new Ibraha" after the tyrant who wanted to demolish the Ka'aba 14 centuries ago.

The present Grand Mosque has three floors and is the largest mosque in the world. It is built around the Kaaba, the most sacred place in Islam.

Earlier, the Saudi government has razed a number of holy sites that belonged to the Prophet Muhammad (s), his holy progeny, wives and companions in the holy cities of Makkah and Medinah etc sending a wave of anger in the Muslim world. (www.abna.ir)

These Sauds are the agents of the Yahud. They want to finish Islam. It was rightly said that he is Abraha of the time.