Yesterday we said last good bye to Salman Ahmad at 5.30 PM. He passed away at 11.00 in the morning. He had been ailing for over 2 months. He was a very active member of Anjumane Azadaraane Husain whose office is next to Moghul Masjid. The family, Relatives and his Anjuman colloegues were present at Rehmatabad to bid farewell to him. He was the elder son of Niyaz Ahmad Banarsi the reknowned poet of Bombay city. His younger brother Kumayl Ahmad has returned from US and was at his grave. Salman was very much social in the Shia community. May his soul rests in peace and he counted among the lovers of Ahlul Bayt (a.s.). 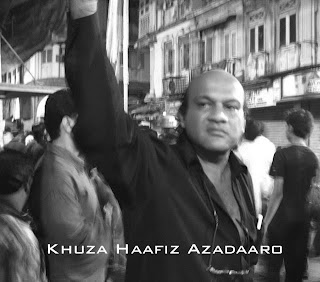 Inna lillahe wa inna ilaihe rajeoon. Razi I`m Babu, one of the sons of Sayed Abbas Ali.I know you and knew Salman also very well, his sister nakia was in my sister rizwana`s class who is now in australia. Very sad to know about his demise, very late to know otherwise I would have come for the funeral. Anyway My condolences to the fly,may his soul rest in peace.(nooralisayed@gmail.com)