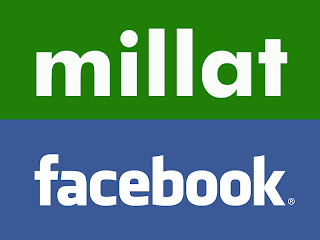 'Facebook for Muslims' launched in Pakistan after real thing is blocked over 'blasphemous' Prophet images.
Resourceful IT experts in Pakistan have launched their own version of the social networking site Facebook after the real thing was blocked for showing 'blasphemous' images of the Prophet Mohammed.
MillatFacebook, meaning Nation Facebook in Urdu, was launched on Wednesday and has already attracted some 8,000 users.
Omar Zaheer Meer, one of the six web developers, said their aim was to offer an alternative to Facebook which condemned the contest encouraging users to submit images of the Prophet Mohammed.
Millat Facebook also promises stronger privacy settings than its US counterpart.
Pakistani IT professionals Omer Zaheerand Arslan Chaudhry browse their newly created networking site in Lahore.
'We are saying that we are technologically independent and that you can't make money from us and then not respect our views' said Mr Meer.
'Millatfacebook is Pakistan's very own, first social networking site. A site for Muslims by Muslims where sweet people of other religions are also welcome,' the website tells people interested in signing up.
The Facebook page 'Everybody Draw Mohammed Day!' encouraged users to submit images of the prophet on May 20.
A series of cartoons of the prophet published in a Danish newspaper in 2005 sparked violent protests and death threats against the cartoonists.
Over the past ten days, access to Facebook, Youtube, encyclopaedia site Wikipedia and photo-sharing site Flickr has been temporarily blocked in Pakistan.
'The (Pakistani) government action against both Facebook and YouTube after it failed to persuade the websites to remove the 'derogatory material,' the regulatory body said in a statement.
It welcomed representatives from the two websites to contact the Pakistani government to resolve the dispute in a way that 'ensures religious harmony and respect'.
While thousands took to the streets to protest against the 'blasphemous' contest, other internet users simply switched to micro-blogging site Twitter to broadcast their protests against the crackdown to the world, which consequently surged with Pakistani traffic.

Facebook protests
When a Facebook user decided to organise an 'Everyone Draw Mohammed Day' competition to promote "freedom of expression', it sparked a major backlash among Islamic activists
'Sad and embarrassing day in the history of Pakistan. Tough times to be a Pakistani. Questionable decisions in a so-called "democracy,"' one user tweeted.
'What's common to Facebook and Lashkar-e-Taiba?' one user on Twitter wrote, referring to a Pakistani militant group that is believed to have carried out the terrorist atrocities in Mumbai.
'They are both banned in Pakistan, but Pakistanis can still find them if they want to.'
Twitter, Facebook and YouTube have all been at the forefront of anti-government protests in the last few years, most notably during last year's Iranian elections.'.
It remains to be seen how successful the government will be at keeping Pakistan's nearly 20 million Internet users from accessing the blocked sites.
Other countries, such as China, permanently ban Facebook and YouTube. But citizens often have little trouble working their way around the ban using proxy servers and other means.
at May 30, 2010

Together we CAN and we WILL WIN (InshAllah)