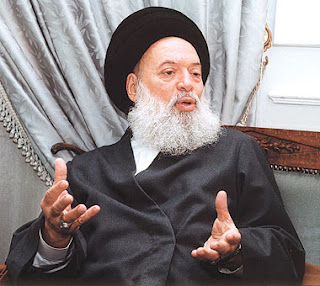 Lebanon's leading Shia Muslim cleric, a key figure in the founding of Hezbollah, has died aged 74, hospital sources have said.
Grand Ayatollah Fadlallah died in a Beirut hospital on Sunday where he was admitted on Friday for internal bleeding.
Grand Ayatollah Sayyed Mohammed Hussein Fadlallah was regarded as Hezbollah's spiritual guide after it was founded in 1982.
A vocal critic of the United States, Ayatollah Fadlallah used to slam US warmongering policies in the Middle East, particularly its alliance with Israel.

Born in Najaf, Iraq, Fadlallah studied Islamic sciences in Najaf before moving to Lebanon in 1952.

In Najaf, Fadlallah was a pupil of the Ayatollah Mohammed Baqer al-Sadr, one of the pillars of Iraqi Islamic rebirth between 1950-1960 and a co-founder of the Dawa Party.
Sadr, who was executed by Saddam Hussein's regime in April 1980, said of Fadlallah: "Anyone who leaves Najaf loses something of Najaf, except Fadlallah. When he left, it was Najaf that lost something."

In the following decades, he delivered many lectures, engaged in intense scholarship, wrote dozens of books, founded several Islamic religious schools, and established the Mabarrat Association.
Through that association he established a public library, a women's cultural center, and a medical clinic.