How to Recite and Understand the Holy Qur'an 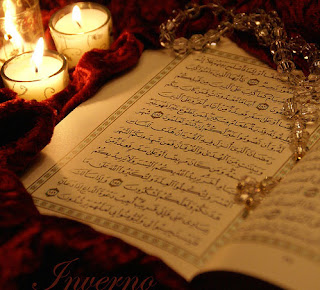 How to recite the Qur'an
1. Do wudhu before reciting. It is forbidden to touch the writings of Qur'an without wudhu. Even when not touching the writings, it is recommended to do wudhu before reciting the Qur'an.
2. See protection of Allah from the Shaytan.
3. Recite with a beautiful voice. The Holy Qur'an should be read slowly, with a beautiful voice and consideration for the rules of recitation. The Holy Prophet (S.A.W.) says: Give beauty to the Qur'an with your voices. And when he was asked as to who had the best voice for recitation, he said: The person who, when you listen to him, you realize that he fears Allah. The Holy Prophet(S.A.W.) has also said: Everything has a decoration, and the decoration for the Qur'an is a beautiful voice.
4. Interact with the Qur'an. Another important point to remember is to interact with the Qur'an when reciting it. When reading verses which promise blessings and reward for the believers, one should be excited and hopeful. But on reading descriptions of punishments meted out to those who disbelieved and displeased Allah, a believer is fearful and seeks refuge in Allah. Sometimes Allah asks a questions, as in Sura ar- Rahman, Which of the bounties of your Lord will you two deny?. Commentators say a recitor of the Qur'an should answer that by saying None of your bounties, my Lord, do I deny. This type of interacting with the Qur'an makes the Qur'an alive, not just a book to be read.

Understanding the Holy Qur'an
It is important that believers try to understand what Allah has revealed in the Holy Qur'an. It is a book of guidance, and to derive and act upon this guidance, we need to read and understand its verses. The fourth Imam (A.S.) says:
· The Qur'anic verses are treasures of Knowledge and whenever a treasure is opened, you have to see what lies therein.
· Ponder over the verses of the Qur'an, and learn from them, for they are the best of lessons.
Understanding the Qur'an could be done through reading the translation, thinking about the words used in the verse, the causes of revelation, and reading and discussing the commentary provided by knowledgeable scholars.
Understanding and pondering over the verses of the Holy Qur'an is an important duty of all Muslims. Allah talks to us through the Qur'an, and we need to read and understand what He says in it. Many Muslims believe that understanding the Qur'an is the duty of scholars, and they are content to just recite the verses without giving them much thought.
The Holy Prophet (S.A.W.)will complain about such Muslims on the day of Judgement. The Qur'an says he will say: O my Lord! My people took the Qur'an very lightly. By studying and pondering over the verses of the Qur'an, we will not be among the group the Prophet (S.A.W.) will complain about on the day of Judgement.
at August 21, 2010