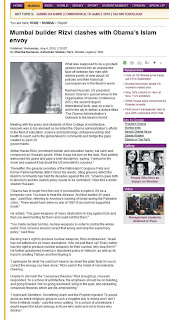 Rashad Hussain, US president Barack Obama’s special envoy to the Organisation of Islamic Conference (IOC), the second largest international body, was on a day’s visit to the city to deliver a lecture titled ‘The Obama Administration’s Outreach to the Muslim World’.
Meeting with the press and students of Rizvi College of Architecture, Hussain was in his element as he listed the Obama administration’s efforts in the field of education, science and technology, entrepreneurship and health to reach out to the global Muslim community and bridge the gaps created by past US governments.
Akhtar Hasan Rizvi, prominent builder and education baron, sat calm and composed as Hussain spoke. When it was his turn on the dais, Rizvi politely welcomed his guest and gave a brief disclaimer, saying, “I welcome the move and support it but doubt the US president’s success.”
Thereafter, the general secretary of the Nationalist Congress Party and former Parliamentarian didn’t mince his words, citing grouses which the Muslim community has held for decades against the US. “America gave birth to terrorism and the Jewish policy needs to be controlled,” Rizvi told a visibly shaken Hussain.