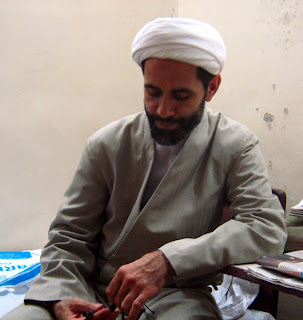 Teacher in Qom Islamic seminary, H.I. Maqsud Mawlayee had his 2nd visit to India. Last Ramadhan he was in Bangalore city and this year he is visiting Mumbai. He went around mainly in the South of the city. Fotowat (Darbare Husaini), Moghul Masjid, Imamia Masjid, Shia Jame' Masjid in Dongri, Kesar Baugh etc. He visited Zainabia on 24th Ramadhan where we had a opportunity to talk to him.
He found the city very adorable. Monineen very warm and welcoming. As he was among the believers during the three Laylatul Qadr, he was nostalgic to see them engrossed in A'maal, crying and seeking forgiveness from Allah, fully awake for all the sacred nights. He confessed that he felt that as if he was in Qom, just like the Haram of Hadhrat Masuma (s.a.), where he had seen the same kind of ebaadat. He also found the momineen of the city very religious and committed. He was very happy over here.
But, he was disturbed a bit that there is a GAP in the relations between Shias and Sunnis over here, while it is not so in Iran. He felt that the Wahhabis are trying very hard to widen this gap. The Shias and Sunnis should be very careful, as these Wahhabis are working for their real masters (US & Israel).
Janab Maqsud Mawlayee was very much impressed by the Indian hospitality. He wished that he would come again and again to this beautiful country.
He could not address the non-Iranians as it was one of the conditions for his visa approval.
Below video is a feeling of him on Mumbai.