Protests in Mumbai on al-Quds Day 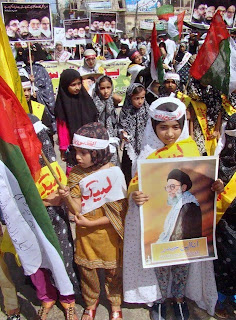 There was a huge participation outside Shia Jaame' Masjid, Dongri in Mumbai South after the Friday prayers protesting the occupation of Israel of the First Qibla in Jerusalem. The last Friday of the month of Ramadhan is observed as the protest of al-Quds day.
Looking at the currents events involving Zionist government's atrocities towards Palestinians and the siege of Gazza has made the Muslims angry towards America and its partners in occupation in Iraq, Afghanistan and Pakistan.
The protesters shouted slogans against the US and the Israel. They were also angry on the hypocrisy of the France and the United Kingdom. One of the protester who has taken off from his office today to be the part of the rally said, "On the atrocities to the Palestinians, the wealthy Arabs are to be blamed as well." Sadiq Abbas an IT professional shouted that the First Qibla is occupied by the Yahudis and the Second one by the Saudis.
While elsewhere in the world there huge rallies in Iran, Iraq, Afghanistan, Pakistan, Turkey and other Muslim countries. As per the news agencies thousands of Palestinians have poured into the streets of Gazaa, marking the International Quds Day.
Chanting anti-Israeli slogans, the angry demonstrators said they will gladly sacrifice all they have to end the Israeli occupation of al-Quds (Jerusalem).
Palestinians have repeatedly said that they insist on East al-Quds, which Israel occupied in 1967 and annexed in 1981, as the capital of their future state. Under international law the area is an occupied territory.
Angry Palestinians also condemned the so-called reconciliation talks between Israeli Prime Minister and acting Palestinian Authority chief Mahmoud Abbas. The talks were held in Washington on Thursday.
Millions of people around the world have marked the international Quds Day by participating in rallies denouncing Israel's atrocities against Palestinians. The rallies were held to show solidarity with the Palestinians, demanding an end to Israel's occupation of their territories.
at September 04, 2010

ur blog is very useful,
Iranian protesters held Quds day as usual, but i don't use to attend because it is a kind of showing our support of our government,

why don't u up ur Mahdi(ajjalallah taala farajaho sharif)blog as much as this one? bring some affirmative reasons for his existence plz.

here's my blog, sometimes i post a little bit,take a visit: www.marziebabaei.blogspot.com