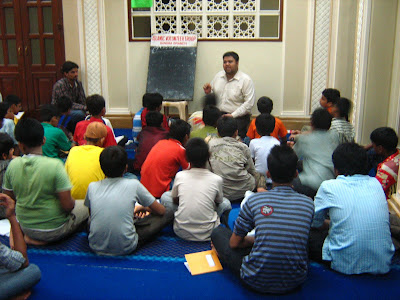 The month of Ramadhan, traditionally a time of frugality and prayer, it has become an occasion for extravagant spending on lavish evening meals.
"You don't keep track of your spending during Ramadhan," said Safdar Husain a small time businessman.
Another believer, a scrap dealer loves to host Iftar meal atleast 3 to 4 times during this month. He says that he enjoys doing this as it gives him optimum spiritual pleasure.

Devout Muslims observe Ramadhan by abstaining from food, drink, smoking and sex from dawn until dusk, across the globe. People get home on time for the iftar meal after sunset.

In Middle Eastern countries, particularly in the Gulf, iftar gives the wealthy an opportunity to show hospitality on a grand scale,some customers even reserve the entire restaurant for an iftar.
Prominent families and socialites compete over who can host the most lavish iftars, and night-long feasts are
not uncommon.

Retail food prices surge as well and even the lower middle classes struggle to make ends meet as fruits, vegetables and meat sell for double or triple their usual prices.

Many clerics lament the loss of the spiritual meaning and traditional character of Ramadhan, which is meant as a month of prayer, fasting and donations to the poor.

"The holy month of Ramadhan should be a return to religion, prayer and a reminder to the observant to aid those in need," said Maulana Zeeshan Haider Zaidi of Masjid Sahibuz Zamaan,Saki Naka. He also said that,
"Iftars hosted outside the home should not be an occasion to show off or prove one's wealth."

On the other spiritual aspect, every Masjid and Imambada in Mumbai has regular Qur'an recitation programme for the whole month. They give away attractive gifts at the end of this month.

Many Masajid and Imambada run special Ramadhan classes for children and junior youths.A young teacher Nahid Abbas conducts one of such class at Bandra Shia Jame Masjid, Bazar Road, Bandra West. He has 40 students in his class. He teaches them simple Islamic laws, simple Shiite beliefs, Morals and true Islamic Stories. He says that during this holy month the children come to the Masjid to recite the holy Qur'an so,it is easy to gather them for such classes. These classes are concluded with attractive prizes and gifts.
In another class, the teacher has called his students to read maximum Qur'anic verses and it was seen that they engage themselves in reciting it in their spare time.
at September 02, 2010