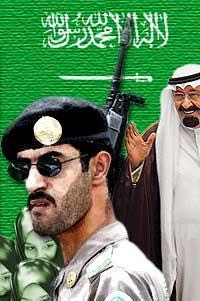 Saudia Arabia, once known as Hejaz. The place where the holy Qur'an was revealed. The Wahhabis run this country on strict and repulsive self-made Islamic Shariat. Country men are throttled in the name of Shariat. The Wahhabis pose themselves as the lovers of the holy Qur'an. There is a huge publication of this book. A virtual ministry exist for this purpose. Every year, the hajis are given this holy book as a parting gift before boarding their flights. They encourage the hajis only to be engrossed in reading holy Qur'an in Masjidul Haraam and Masjidun Nabawi. They discourage the mixing of hajis with each other to discuss over their political and economic conditions.
The religious police, the Mutawwa, continues to rule. The Kingdom boasts on safeguarding Islam’s holy places, but, is always mum when Islam is attacked by its enemies. Certainly it is not considered a model by the Muslim world.
This Saudi Arabia has supplied manpower and money power for suicide squads in Iraq, Iran, Afghanistan, Pakistan and India, not for the enemies, but, for the elimination of the Muslim brethren.
This is the same country which supported Israel indirectly in 2006 attack on Lebanon and prayed for the defeat of Hezbollah.
This very kingdom has been SILENT on the issue of burning of the holy Qur'an in United States of America, its key ally. What a hypocrisy. It proves that they are True Friends of Yahud and Nasaara (Jews & Christians).
at September 14, 2010

The superiority of the Qur’an over the rest of words, is like the superiority of Allah over His creations.”
Qoran e Kareem is a heavenly book and miracle of Allah (swt) upto Qiyamat for guidance of mankind and these hypocrites enemies who claim to be followers of Christ and planned by America have done a worst act which is condemned by all religions and right minded people. May Allah (swt) curse the ones who committed this shameful act and those who supported them directly and indirectly .

where to buy vicodin vicodin and alcohol - generic vicodin reformulation