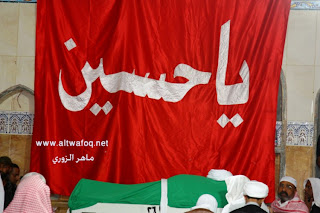 The body of Sheikh Muhammad Ali al Amri, top Saudi Shia religious figure and leader of Shias in Medina was buried in the cemetery of Jannat ul Baqee near the Shiite holy Imams and other faithful people.
According to the informed sources, despite the high-security of Saudi wahhabi forces, hundres of thousands Shias and non-Shias attended the ceremony.
Top religious figures from Saudi and other countries participated to the funeral ceremony of Sheikh Mohammad Ali Amri.
“Sheikh Mohammad Ali Al Amri suffered a lot and Saudi Arabia government sentenced him to execution so many times,” said Shirazi, the expert in Saudi Arabia issues and underlined,” but fortunately these ordered never executed because those gave these orders faced with different problems.” full story and pictures.
at January 31, 2011