Hypocracy of Obama, the American President

Very concerned about violence in Egypt - government must respect the rights of the Egyptian people & turn on social networking and internet.
PressSecretary, Robert Gibbs (EOP)


Adalah-NY recently posted on American-made tear gas made by Combined Tactical Systems (CTS), a part of Combined Systems Inc.,  being shot at protesters across the West Bank. Now this theme is at last being echoed in the mainstream press, about Egypt and the same US tear gas company. From the Telegraph:
A stark contrast, however, to the US's calls for calm has come from protesters angry at the fact that the tear gas canisters being fired at them by security forces seem to be made in America - via AFP: "Egyptians staging anti-government protests on Friday vented anger at the fact that the tear gas security forces are firing at them is US-manufactured, probably part of a massive military aid package. "'The American taxpayer should know how their money is being spent,' shouted one young male protester who declined to give his name, brandishing a spent tear gas canister marked 'Made in USA.'
"Dozens of the canisters made by Combined Tactical Systems in Jamestown, Pennsylvania, were fired at crowds on one Cairo street on Friday, littering the road surface along with rubble and spent shotgun cartridges. "Many protesters have been injured through tear gas inhalation and by being hit by the canisters themselves, with the security forces sometimes firing them straight at demonstrators." Complete Story 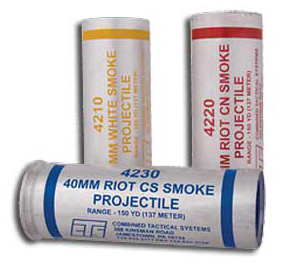