Big Egyptian Revolution: A Shock for Israel and US 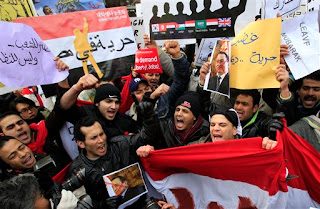 This is big: very big.  I was talking to a friend earlier: this is possibly the biggest strategic shift in the Middle East since the Israeli invasion of Lebanon in 1982.  The beauty of it for dreamers (and its alarm for enemies like Israel) is that it is unpredictable.
The biggest victory is that `Umar Sulaman is out of the picture now.  Israel/US/Saudi Arabia were hoping that he would be the extension of Mubarak until some other clone of Mubarak is found.  That was not meant to be.
Don't get me wrong: US and Saudi Arabia will now rush with bags of gold and cash to influence all members of the military command council.  The beauty of that is that there is no one person: it is a collective leadership (even if this rules for a transitional period) and the momentum of the Egyptian people will restrict their powers, notwithstanding wishes to the contrary by US/Israel/Saudi Arabia.  One person in the council will emerge; we don't know who: and there will be leaks and back stabbing and plots and conspiracies.
There will be chaos in Egypt: which is good.  People will come from nowhere: don't memorize the news names of this developing news story: you will hear of new names soon.  This is a big strategic development: if Tunisia affected Egypt: Egypt is destined to affect the entire region (unless you believe that the announcement of cash bonuses from the Bahraini King this morning was a pure act of charity.  Israel is in deep trouble, as is the US; Egypt was an intelligence and sabotage center.
The entire country and its dyamics are now unleashed on the word.  There will be new ideas and new current and trends.  Certainly, the freer the Arabs are, the more trouble for the US/Israel/Saudi Arabia.
Read the statement of the Saudi foreign minister: he just yesterday remembered the justice of the Palestinian cause. There is panic in Arab ruling circles.  I spoke to a dear Jordanian friend this morning: he was calling to congratulate me.  I told him: I now think that I will finally see your farm in Jordan.
Those who stood by the Egyptian uprising (the Arab people and Hizbullah--Hamas was too afraid to speak a word--and Aljazeera and Arab nationalists everywhere) will be in the good grace of the Egyptian uprising.
And those who were opposed: the Wahhabi Arab liberals, Israel, House of Saud and its propaganda outlets will be in trouble.  Let me put it this way: Saudi princes will not feel comfortable in returning to the brothels of Cairo anytime soon.
The shock for Israel and US is double: not only is Mubarak gone, but so is Sulayman.  The ouster of Sulayman ran against their scheme.  I believe that Mubarak arranged for that (although the people insisted on it) to get back at the US.  Leaving them to scramble.  The good thing is that Minister of Defense Tantawi has the leadership skills of Joe (six pack) Biden.  Stay tuned.