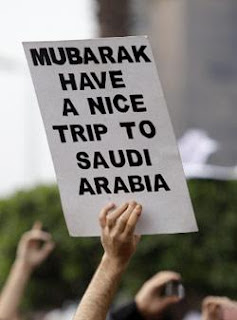 Efforts of America and Israel is bearing fruits. They are not in a hurry to decide Egypt's fate.
They are busy in facilitating "Orderly Transition" as per their choice.
Angry Arab says: If Obama and Hillary were around for the Titanic disaster, they would have advised that the ship was not sinking: that it merely needed the passengers and captain to engage in meaningful dialogue.
Mubarak will not resign unless a new puppet is negotiated.
Two aspirants are in the midst of the people in Tahrir Square, one al Baradei and another Amr Mousa (Arab League chief).
Let's see who plays Saamri.
Firaun (Pharoah) is on the verge of drowning in the Nile.
Moses is yet to appear.
Keep you fingers crossed. Let the Egyptian people uncross it.
at February 05, 2011