Greetings to All on the Birth Anniversary of Hadhrat Zainab (a.s.) 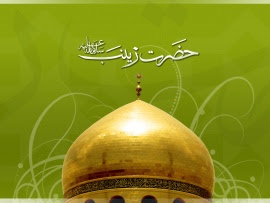 Today is 5th Jamaadil Awwal, the birth anniversary of Hadhrat Zainab (a.s.), called as Sayyda Zainab. Sayyida Zainab (sa) is the elder daughter of Imam Ali (as) and Hazrat Fatima Zahra (sa), and eldest granddaughter of Prophet Muhammad (saw) and Ummul Momineen Hazrat Khadijah (sa). She was the third child of the family i.e. she was born after Imam Hussain (as). She is the sister of Imam Hasan (as) and Imam Hussain (as), Sayyid Shabab ul Jannah. Her younger sister is Hazrat Umm-e-Kulsoom (sa).
Fatima (AS) and Ali (AS) did not name their child until a few days after her birth, for they awaited the Prophet's return from a journey so that he could propose the name.
When finally the baby girl was brought before him he held her in his lap and kissed her. The Angel Jibra'il came to him and conveyed the name that was to be hers, and then he began to weep. The Prophet (PBUH&HF) asked why Jibra'il wept and he answered,


"O Prophet of Allah. From early on in life this girl will remain entangled in tribulations and trials in this world. First she will weep over your separation (from this world); thereafter she will bemoan the loss of her mother, then her father, and then her brother Hasan. After all this she will be confronted with the trials of the land of Karbala and the tribulations of that lonely desert, as a result of which her hair will turn grey and her back will be bent."  Read More