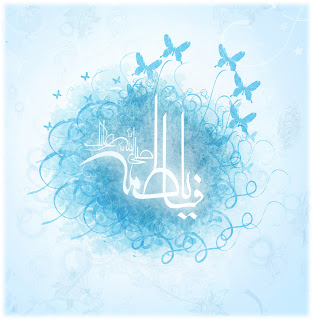 Imām Ja'far al-Sādiq (A.S.) said:
‘‘Hazrat Fātimah (s.a.) has nine names near Allāh (Exalted be His Name), they are:
Fātima,
Siddiiqah (the honest),
Al-Mubaarakah (the blessed one),
At-Taahirah (virtuous),
Az-Zakiyyah (the chaste),
Ar-Radhiatul Mardhiah (she who is gratified and who shall be satisfied),
Al-Muhaddathah (a person, other than a prophet, that the angels speak to), and
Az-Zahra (the splendid)."
at May 22, 2011

Imam As-Sadiq (p) quoting his father said, “The Messenger of Allah said: O’ Fatima, do you know why you have been given the name Fatima?”
Imam Ali (p) said: ‘Why was she named Fatima?’ The Prophet (p) replied: ‘Because she and her followers (Shiites) are protected from the fires of hell.’”

She was named Al-Mubaraka because abundant blessings came from her. The most significant was the blessing of eleven Imams whom she is the mother of.

She is At-Tahira because Allah revealed in the Quran the ‘Ayah of Purification’, “And Allah only wished to keep all abomination far from you, oh members of the family, and to keep you pure and spotless.”(33:33)

Fatima was pure and free from all sins so for that reason she is called Az-Zakiya.

Marziyya - She achieved this name and rank through her good deeds that pleased Allah and made Him well satisfied with her. “Return to your Lord, well-pleased (with him), well-pleasing (Him). (89:28)

She is called Az-Zahra because as Ibn Abbas narrates that the Prophet of Allah (p) said: “Surely my daughter Fatima is the Mistress of all women from the beginning to the end. She is a part of me, and the light of my eyes. She is the flower of my heart, and is my soul. Fatima is a human huri, who whenever she stands in prayers in the presence of her Lord (Exalted is His name), her light illuminates the skies for the angels, like stars shine to people on Earth.”