Dr Syed Ahmed: “In the name of Allah” 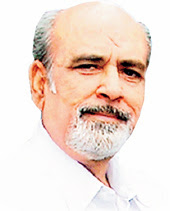 Ranchi: The Jharkhand High Court on Thursday dismissed a petition that has termed the oath of Governor Dr Syed Ahmed as unconstitutional because of his choice of word while taking the oath of office and secrecy.
Dr Syed Ahmed had used the phrase “In the name of Allah” instead of ‘In the name of Ishwar, while taking oath as Governor of the state.
Terming both ‘Ishwar’ and ‘Allah’ as one and the same, the court rejected the petition.
Dismissing the petition, the division bench of Chief Justice Prakash Tatiya and Justice PP Bhatt said such petitions should not be filed that in order to gain publicity. The court clarified that oath can be taken on any God’s name. Full Story
It is to be noted that Dr Sayed Ahmed was an MLA from Nagpada constituency for number of terms and served his state as a  minister in the Maharashtra Government.
He is also famous as "Ahmed Mazloom" in his community. A pious and soft spoken person. During the time of emergency in 1977 most of the loyals of Mrs. Indira Gandhi had deserted her and her party, but, Dr. Sayed Ahmed stood firm in her support.
at September 26, 2011