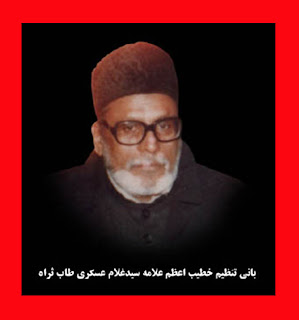 A Majlis has been organised by Zainabia Trust, at Zainabia Imambada tonight at 8.00 PM for the eisaal-e-sawaab of marhum Maulana Sayed Ghulam Askari (TS).
It will be recited by Hujjatul Islam, Sayed Hasnain Rizvi Kararvi.
Marhum Ghulam Askari (TS) was the founder of Tanzeemul Makatib, Lucknow. This Organisation was founded for the religious education for the young generation.
After the demise of marhum in May, 1985 it was propelled ahead by marhum Allamah Sayed Zeeshan Haider Jawadi. But, after the passing away of Allamah in year 2000, it had become unstable. Many founder members, scholars and Olama of Tanzeem have resigned
The secretary has been on his post nearly  for two decades.
There are two groups now. Accusing each other of corruption and electoral manipulations.. Many cases have been filed in the court of law against each other.
Famous personalities and the likes of Dr. Payam Azmi, Maulana Tasdeeq Husain Rizvi, Maulana Maroofi (London) have disassociated themselves from Tanzeem.
Maulana Manzar Sadiq who was the principal of the Hawzah of Tanzeem was forced out from him post.
We pray to Allah that this dispute is settled amicably, which will be beneficial for the children of the community.
at October 06, 2011