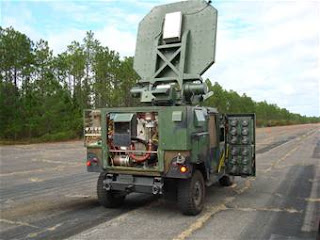 A controversial nonlethal weapon that uses microwave energy to create intense pain is being considered for use in Afghanistan, AOL News has learned.
An Air Force military officer and a civilian employee at the Air Force Research Laboratory told AOL News at an industry conference here that the Active Denial System, which heats the top layer of skin via millimeter waves, was in Afghanistan for testing. The sources were not able to offer details on how or whether the weapon was being used in combat.
The weapon is designed to shoot an invisible beam of energy at people, creating an intense burning sensation that forces them to flee. The Air Force has called it the "goodbye effect." It has not been used before in military operations.
The Air Force Research Laboratory Directed Energy Directorate Active Denial System (ADS) is a counter-personnel, non-lethal, directed energy weapon.
U.S. Air Force
The Active Denial System, a nonlethal weapon being considered for use in Afghanistan, shoots at its target energy that causes a burning sensation on the skin. The heat quickly becomes intolerable and forces the target to move.
Defense Department representatives confirmed the weapon was being considered for use and did not deny it was in Afghanistan, but indicated it had not yet been used operationally.
"Consideration is under way for the appropriate employment of an Active Denial System," Kelley Hughes, a representative for the Joint Nonlethal Weapons Directorate, wrote in an e-mail to AOL News.
In 2008, the Pentagon considered deploying the Active Denial System in Iraq, but the effort was stymied over policy concerns. Whether it will become part of the U.S. arsenal is Afghanistan remains unclear.
"It is my understanding that there are discussions under way about deploying an ADS but no decision/approval yet," Marine Corps Col. Dave Lapan, a Pentagon spokesman, wrote in an e-mail to AOL News when asked whether the Pentagon's civilian leadership had approved the weapon's use in Afghanistan.
Lapan was unable to respond by deadline to requests for further clarification.

Source http://www.aolnews.com
Note: Now, the Occupy Wall Street (OWS) protestors in United States will very soon experience the effect this weapon. The administration may use this to disperse the peaceful occupiers.
at December 24, 2011