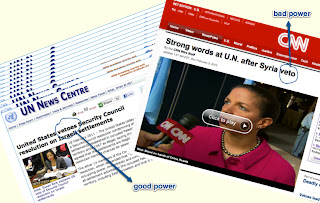 Resolution Vetoed by the United States
1972 Condemns Israel for killing hundreds of people in Syria and Lebanon in air raids.
1973 Affirms the rights of the Palestinians and calls on Israel to withdraw from the occupied territories.
1976 Condemns Israel for attacking Lebanese civilians.
1976 Condemns Israel for building settlements in the occupied territories.
1976 Calls for self determination for the Palestinians.
1976 Affirms the rights of the Palestinians.
1978 Urges the permanent members (USA, USSR, UK, France, China) to insure United Nations decisions on the maintenance of international peace and security.
1978 Criticises the living conditions of the Palestinians.
1978 Condemns the Israeli human rights record in occupied territories.
1978 Calls for developed countries to increase the quantity and quality of development assistance to underdeveloped countries.
1979 Calls for an end to all military and nuclear collaboration with the apartheid South Africa.
1979 Strengthens the arms embargo against South Africa.
CLICK For complete list