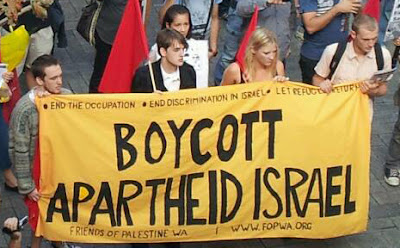 For decades, the state of Israel has denied Palestinians their fundamental rights of freedom, equality, and self-determination through ethnic cleansing, colonization, racial discrimination, and military occupation. Despite abundant condemnation of Israeli policies by the United Nations, international bodies, and human rights organisations, Israel’s crimes have continued with impunity.
On July 9 2005, a year after the International Court of Justice declared Israel’s apartheid wall in the Occupied Palestinian Territories (OPT) to be illegal, a clear majority of Palestinian civil society called upon people of conscience all over the world to launch broad boycotts, implement divestment initiatives, and to demand sanctions against Israel, until Palestinian rights are recognised in full compliance with international law. Full Story
at February 25, 2012