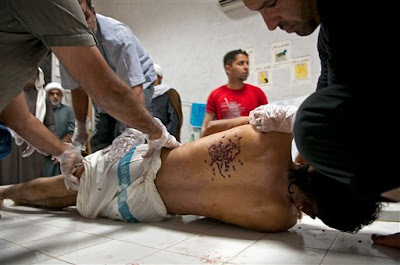 For all intents and purposes, Bahrain is forgotten. The people of Bahrain and their struggle will never get the attention and admiration of people and governments in the West.
This week, it was rather ironic to watch and listen to BBC coverage of Bahrain in comparison to their coverage of Syria. Activists who were interviewed were treated like criminals, while Syrian activists are allowed to make all sorts of claims, even claims that are not substantiated. The BBC sneered at the use of fire bombs by some protesters in Bahrain, while Syrian activist are permitted to call for the use of arms on the air. Hillary Clinton called on the Syrian people to keep their arms and “logistical” help that has been provided to the Free Syrian Army (which is a collection of bands and gangs operating under names derived from Islamic history and from rulers of gas and oil kingdoms). Yet, the spokesperson of the US Department of State called on the protesters of Bahrain to show “restraint.” If she called on the protesters in Syria to show restraint she would have been fired.
The struggle of the people of Bahrain is as old as the history of modern Bahrain. The political dynamics in Bahrain can not be reduced to the sectarian framework that is now being imposed by the Bahraini royal family and by the Saudi and Qatari media. Western media simply follows suit, and they unfailingly refer to the protests and opposition in Bahrain in sectarian terms.
They have refrained from attaching sectarian labels to the blatantly sectarian gangs and organizations in Syria. Secular and Arab nationalist movements dominated the struggle of the people in Bahrain during the Arab cold war, and the Bahraini labor movement has been one of the most vibrant movements in the region. full story
at April 28, 2012