Qatar Named as the Fattest Nation on Earth 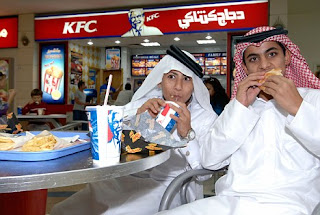 Qatar, the richest nation on earth, is also the fattest with half of all adults obese and 17 per cent of the population suffering from diabetes.
By comparison America, which is often assumed to be the fattest, looks positively slim with a third of adults obese and eight per cent diabetic.
Out of a population of 1.7million, just 250,000 are native Qataris, who, in the space of just two generations have switched from a tribal existence to living in air conditioned villas being waited on by armies of servants.
Qataris are developing diabetes a decade younger than average, which, in turn, is pushing up rates of illnesses like hypertension, partial paralysis, heart disease,  and blindness.

In recent years Qataris have developed a love of fast food with branches of KFC and McDonald's springing up in the many air conditioned malls. Full Story