Where are the Advocates of Human Rights? 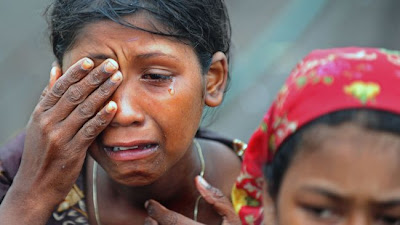 The widespread killings of Rohingya Muslims in Myanmar - have received only passing and dispassionate coverage in most media. What they actually warrant is widespread outrage and decisive efforts to bring further human rights abuses to an immediate halt.
“Burmese helicopter set fire to three boats carrying nearly 50 Muslim Rohingyas fleeing sectarian violence in western Burma in an attack that is believed to have killed everyone on board,” reported Radio Free Europe on July 12. Why would anyone take such fatal risks? Refugees are attempting to escape imminent death, torture or arrest at the hands of the Ethnic Buddhist Rakhine majority, which has the full support of the Myanmar government. Full Story
at July 17, 2012

May ALLAH (swt) hasten Zuhoor of Imam e Zaman (as)the only hope and Saviour of Mankind and source of relief and refuge to the oppressed one and establisher of Justice , Equity and Peace in this Era of Oppression and Cruelty .