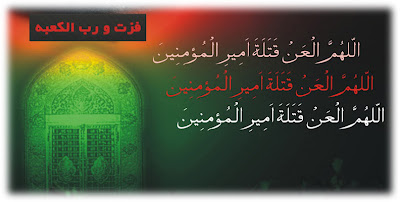 The Kharijis had been defeated at Nehrwan, and most of them had perished in the battle but a few had escaped. Abdur Rahman bin Muljam was one of those who had escaped. He was consumed with the desire to kill Ali, and was in quest of an opportunity to do so. By a coincidence, he met a Kharji woman, one Qattama, whose father and brothers had also been killed in Nehrwan, and she too had nursed an undying hatred of Ali.
Abdur Rahman fell in love with Qattama, and proposed marriage to her. She told him that the price of her hand was the head of Ali ibn Abi Talib. This only strengthened Abdur Rahman in his resolution. He promised his inamorata the moon if she asked for it, but she said that nothing was of interest to her if she could not get the head of Ali ibn Abi Talib!
Abdur Rahman bin Muljam carefully worked out his plans to kill Ali. A few other trusted Kharjis also volunteered their services to him, and together they rehearsed the assassination. Abdur Rahman bin Muljam took one extra precaution – he put his sword in deadly poison, and let it soak in it for three days.
On the morning of the 19th of Ramadan of the year 40 A.H., Ali came into the Great Mosque of Kufa, and called Adhan (the call to prayer). He took his place in the alcove, and moments later, the worshippers began to arrive. They stood behind him in serried ranks, and the prayer began. Standing in the front row, with other worshippers, were Abdur Rahman bin Muljam and his confederates. They were watching Ali's movements. In the folds of their cloaks, they were carrying swords burnished to a high sheen, and soaked in poison.
Just when Ali touched the ground with his forehead for sajda, Abdur Rahman bin Muljam stepped out of his row, and crept into the alcove. And just when Ali lifted his head from the ground, ibn Muljam struck the fatal blow at his forehead with such deadly force that it split open.
Blood squirted from Ali's forehead in several jets, and he exclaimed:
"By the Lord of the Kaaba, I am successful!"  Read Full Article