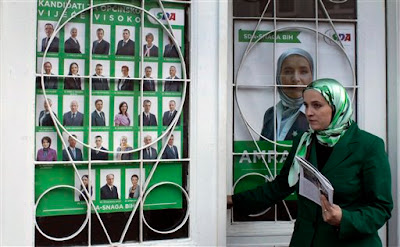 When Amra Babic walks down the streets of the central Bosnian town of Visoko wearing her Muslim headscarf, men sitting in outdoor cafes instantly rise from their chairs, fix their clothes and put out their cigarettes.
The respect is only natural: Babic is their new mayor.
The 43 year-old economist has blazed a trail in this war-scarred Balkan nation by becoming its first hijab-wearing mayor, and possibly the only one in Europe. Her victory comes as governments elsewhere in Europe debate laws to ban the Muslim veil, and Turkey, another predominantly Islamic country seeking EU membership, maintains a strict policy of keeping religious symbols out of public life.
For Babic, the electoral triumph is proof that observance of Muslim tradition is compatible with Western democratic values.
"It's a victory of tolerance," the wartime widow says. "We have sent a message out from Visoko. A message of tolerance, democracy and equality."
She sees no contradiction in the influences that define her life.
"I am the East and I am the West," she declares. "I am proud to be a Muslim and to be a European. I come from a country where religions and cultures live next to each other. All that together is my identity." Read Full
at October 26, 2012