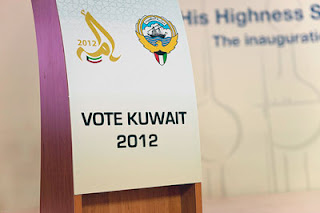 Kuwait's Shia minority has won for the first time more than a third of the 50-member parliament in polls boycotted by the opposition which declared the new assembly "illegitimate" due to poor voter turnout.
According to official results released on Sunday, the Shias - who form around 30 per cent of Kuwait's native population of 1.2 million - won 17 seats compared with seven they won in the scrapped 2012 parliament and nine in the 2009 house.
Three women were elected to the new parliament compared to four in 2009, according to figures released by the National Election Commission.
The new house includes as many as 30 new faces reflecting the total boycott by former MPs who consist as the leading members of the opposition.
Sunni Islamists were reduced to a small minority of four MPs compared with as many as 23 in the house elected in February. Full Story
at December 02, 2012