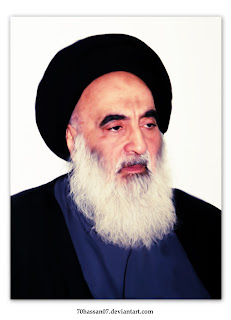 (Ahlul Bayt News Agency) - Ayatollah Sistani has met with top Sunni scholars stressing the necessity of unity between Shia and Sunni and urged the Iraqi nation to unite against terrorists.

Grand Ayatollah Seyyed Ali Sistani, in a meeting with Sunni scholars and head of Shafi'i institute called for the Iraqi nation to conjoin and stand against terrorists.

The Ayatollah warned against the enemies and said, "Enemies are looking for separating us," adding that "there was no difference between Shia and Sunni."

In this meeting Shaykh Adnan al-a'ani, prayer leader of Sharjeel Mosque in Baghdad, accused the former Baath party regime of Iraq to spread sedition in the Iraqi nation and stressed that the nation will maintain its unity.

Apart from his prominent role as Twelver Shia jurisprudent, he plays an important role in political issues of post-invasion Iraq.
at January 26, 2013