Mass crowds started early on Sunday to flock to streets to reaffirm their allegiance to the ideals of the late leader of the Islamic Revolution Ayatollah Imam Sayyed Ruhollah Khomeini.

In the capital, crowds waving Iranian flags and portraits of Imam Khomeini walked towards the landmark Azadi (Freedom) Square.
Marchers also chanted "Death to Israel" and "Death to America" as they headed for the square, some waving posters of supreme leader Ayatollah Imam Sayyed Ali Khamenei, where President Mahmoud Ahmadinejad made an address.
Iran is holding similar rallies nationwide, especially in large provincial capitals such as Mashhad, Isfahan, Shiraz and Kerman.
Special ceremonies were held at home and abroad on January 31, the day that Ayatollah Khomeini returned to the Iranian capital, Tehran, on February 1, 1979 after a 15-year exile in Paris.
The day of Imam Khomeini's return to Iran marks the beginning of celebrations, dubbed Ten Days of Dawn, which culminate in the anniversary of the victory of the Islamic Revolution on February 10.
The Iranian nation toppled the US-backed Pahlavi regime 34 years ago, ending 2,500 years of monarchic rule in the country.
The Islamic Revolution, under the guidance of Imam Khomeini, established a new political system based on Islamic values and democracy. (abna) 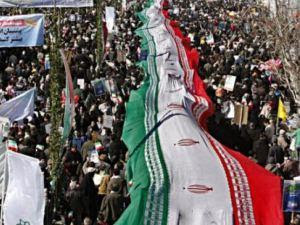