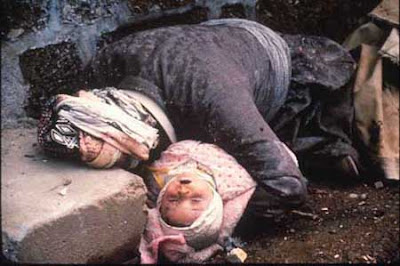 "As Americans and others around the world note the 10th anniversary of the U.S. invasion of Iraq (the American military commenced hostilities on March 20, 2003), it is equally appropriate to recall another anniversary connected to wars of aggression in the Middle East—the 25th anniversary of Iraqi chemical weapons attacks against the town of Halabja, in Iraqi Kurdistan (on March 16, 1988)." "Halabja marked something of a turning point in the United States' scandalous support for Saddam Husayn's war of aggression against the Islamic Republic—including his use of chemical weapons against civilian as well as military targets. Ever since the Iraqi military had started using chemical weapons in 1982 and Iran had started complaining about it to the United Nations Security Council, the United States had blocked any Security Council action on the matter. As we recount in Going to Tehran, UN Secretary General Javier Perez de Cuellar, acting on his own (because the Security Council wouldn't support him), sent six fact-finding teams to investigate Iraq's use of chemical weapons between 1984 and 1988. Their reports consistently confirmed Iran's charges—and just as consistently, the United States refused to let the Council act. As then Secretary of State George Shultz later explained, Washington blocked international pressure on Iraq to stop using chemical weapons because "you don't want Iran [and now Syria] to win the war." (Posted by As'ad AbuKhalil)
Full Story