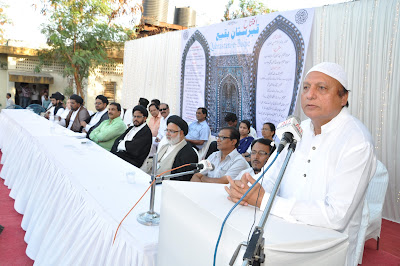 Yesterday the Shia Isna Ashari graveyard named as "Qabrastan-e-Baqie" was inaugurated. Belivers from the different localities of Mumbai came to witness it.Many city Anjumans also reached the venue by chartered buses. Many social and political personalities attended this historical function.
Minster of Maharashtra Mr. Mohammad Naseem Khan delivered an encouraging speech. Dr. Sayed Akhtar Hasan Rizvi gave his inaugural speech and said that after Independence the Shia Isna Ashari Community has their own graveyard. Uptil now we were relying on Iranian Cemetery, Rehmatabad at Mazgaon in South Bombay. He also gave the news that 3-4 are coming up soon at Kalyan, Vasai, Govandi and Juhu.
This cemetery will be maintained by Zainabia Trust and will also be managed by it.
Hujjatul Islam Maulana Sayed Hasnain also spoke on this occasion reminded that every person will have an ultimate return over here, none can escape death.
A lady was laid to rest at the venue inaugurating this graveyard. The function ended on namaaz with jama'at.